WYSIWYG was an investigation of sonified soft materials that encourage playful interaction. The group was a diverse mix of artists, scientists and musicians from McGill University’s Input Devices and Music Interaction Lab and Concordia University’s Topological Media Lab. In the first phase of the project, a large, stretchy, light-sensitive square “blanket” was developed, which was shown at a public exhibition on October 31st 2006. At the show, visitors interacted with the interface by standing under it and lifting it up. The tension of the fabric was such that shapes and waves could be made, producing rich, multichannel sound. Detailed discussion of this installation can be found in the publication Mapping and dimensionality of a cloth-based sound instrument

In the second phase, a tapestry was designed and woven with conductive thread which was used to generate an electric field. At its public exhibition on July 18th, 2007, visitors could touch various parts of the tapestry to generate sound. The interplay of narrative image on the tapestry and the abstract sound associated with it encouraged discovery and experimentation. 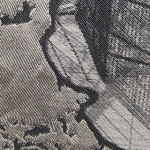 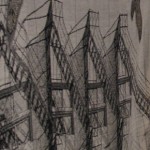 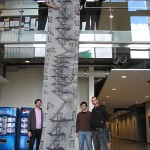 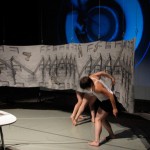 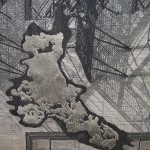 The following overview is from the Topological Media Lab’s WYSIWYG page:

As an extension of the research work conducted with the Topological Media Lab (TML), Sha Xin Wei and his team are creating textile objects such as wall hangings, blankets, scarves, and jewelry that create sound as they are approached or manipulated. These sonic blankets can be used for improvised play. A phonetic pun on the old acronym for What You See is What You Get from the era of the Graphical User Interface, WYSIWYG (for wearable, sonic instrument, with gesture) draws on music technology, dance, children’s group games, textile arts, and fashion. Created first and foremost to sustain social play for people of all ages, WYSIWYG allows players to express themselves whether enjoying time in a park, dancing at a club, passing the time during a long car trip, or just playing at home.

The custom-designed digital instruments embedded in the cloth sample movement to transform ambient body movement and freehand gestures into new sounds or “voices” associated with a player or transmitted to other players in the vicinity.

When the project was launched in November 2006, the WYSIWYG team experimented with a prototype ”blanket” able to sense how it is handled. During the presentation, eight people manipulated this photo-sensitive blanket to produce a spatial sonic landscape. In July 2007, dancers performed a semi-choreographed movement improvisation around a 20’ suspended “tapestry” and a 6-foot “tablecloth” woven with conductive thread on a Jacquard loom by Joey Berzowska’s XS Labs.

David Gauthier with capacitive proximity sensor in the form of a bird woven from conductive fiber. © 2007 Topological Media Lab.